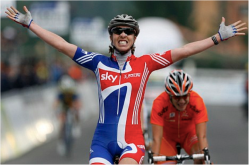 Nicole Cooke is no ordinary cyclist. Not only has she won Olympic gold and the women’s equivalent of the Tour de France (the Grand Boucle in 2006), she had to do it despite the barriers she faced – broken contracts, unpaid wages, injury and drugs cheats, all of which she documented in her ground-breaking autobiography, “The Breakaway – My Story.”
A staunch fighter for gender equality in cycling, Cooke wants to level the playing field, and believes fans and media coverage can drive the change. She kindly took the time to answer our role model questions at this year’s Women’s Sport Trust awards ceremony.

What was your first experience of sport? How did that develop to where you are now?

Well my first experience of sport was just growing up as a kid in a fairly sporty family, where we did everything – whether it was cycling, running, games, anything. I did all the school sports and loved it. My dad used to race in cycling so that’s where the cycling background comes from. They weren’t pushing me into cycling at all. My parents would say, try other things, try tennis. But I really wanted to do some races. I did some races, and enjoyed it. I was wanting to try and succeed in cycling, and my mum and dad supported me along the way. So I was always looking towards the next level, the next championship.

What was it that really drew you to cycling as opposed to other sports?

I’d say, particularly with road racing the different tactical elements just gives an unknown dimension to the race. Where you’ve got to make decisions, you know it can go a number of ways, and you’re always thinking about what to do to maximise your chances of winning. So that really appealed to me. But also the physical side of it, the training. Where the harder you train the stronger you get. It seems a pretty basic formula but that really appealed to me.

Who were your sporting role models as a child? How about now?

I had lots of people who were my inspiration so I would never say I had just one role model. Getting started in cycling, I remember watching Robert Millar doing the Tour de France in the mountains, attacking, and that was very inspirational to me. To see a British rider at the time, the only British rider in the race, taking on the best. Riding with a lot of passion and a lot of guts. That was very inspirational. And then I started getting into the cycling scene in South Wales; I met Sally Hodge and Louise Jones who were track cyclists who had won medals internationally. And just talking to them, and them saying, it’s about the training, you know, there are no shortcuts. I guess it just really assured me that I was on the right path.

Was there ever a time when you almost gave up and, if so, what made you keep going?

Never through my own lack of motivation. I had a bad injury in 2007. After a year and an operation, which should have fixed it, I came back into building up my training. I had the pain come back and that’s when I thought, well I think I’ve tried virtually everything. It was the winter before the 2008 Olympics. And that was the point when it all seemed a bit lost, in the sense that I might lose too much training time in my winter… Luckily that practicality set in of wanting to get to the bottom of it and not giving up… not wanting any regrets. I’d invested 12, 13 years of my life into this; I’d better see it through! And I was able to slowly get on top of it. So it all worked out.

How would you motivate someone to get active and engaged in cycling?

The possibilities in cycling are endless. That’s the best thing about cycling, for pleasure, for socialising, road racing, mountain biking, road, track, whatever you’re interested in, there’s something for everyone. So I think if people want to get into cycling, definitely get some friends, join a club, enjoy the social side of it as you build up your strength and endurance. And then just enjoy it and take it steady, don’t put any limits on what you’re doing.

How important are sports fans and audience to you as a sports-person and to your sport?

The fans have got a massive role to play because they’re the proof of the sport being interesting. Having fans rave about a race or an event or rider, it proves that it’s a sport that deserves the coverage. It knocks down all those arguments that people aren’t interested. You know, arguments usually spouted out by TV companies. In terms of getting more coverage, it’s also down to federations to keep women’s sport from failing and giving it the support that it needs.